On Saturday September 3rd on the occasion of the Open Hospitals in Syria conference, AVSI was received in audience by Pope Francis 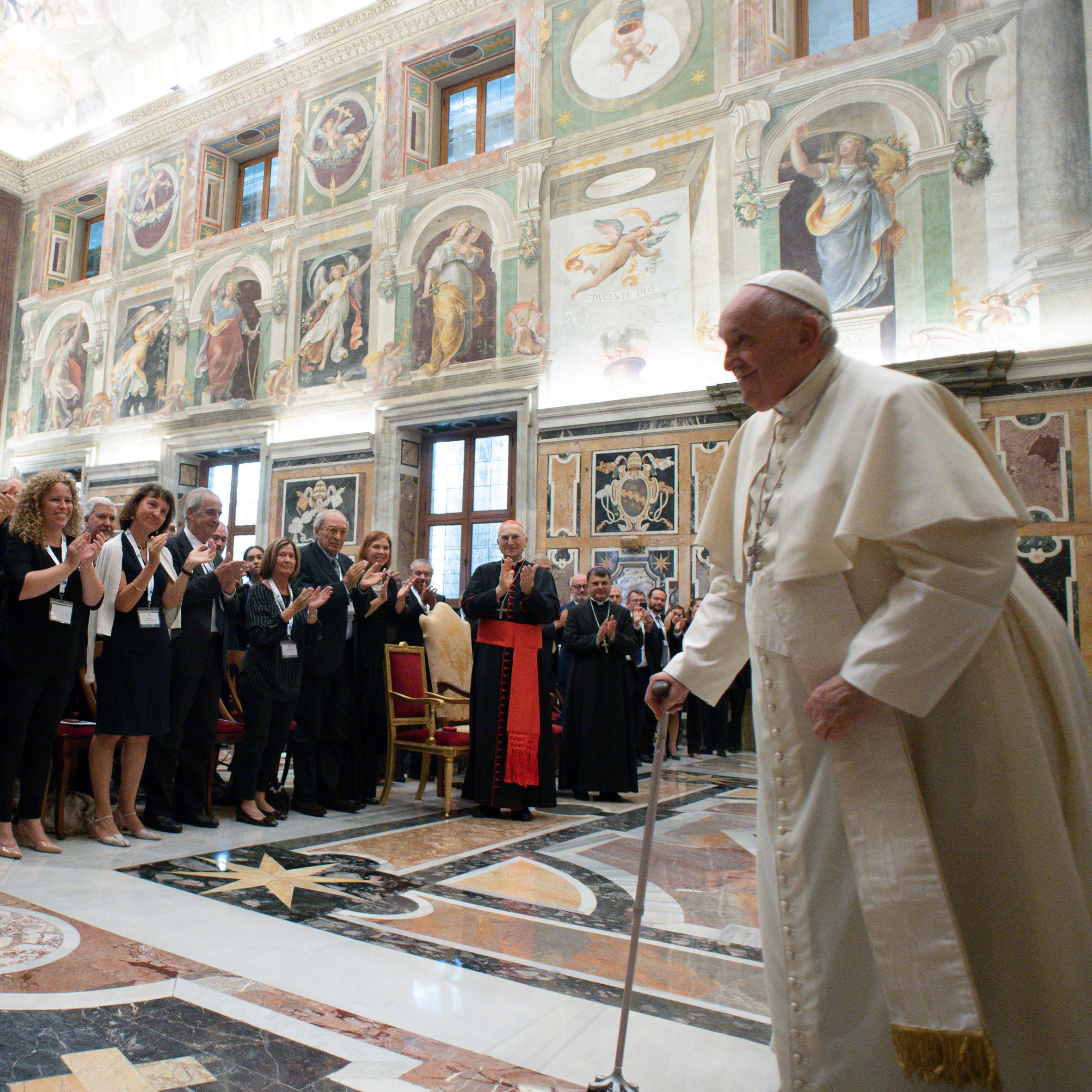 Below, the greetings that Giampaolo Silvestri, Secretary General of AVSI, addressed to the Pontifex and the Pope's speech

The words of greeting that Giampaolo Silvestri addressed to the Pontifex

I would like to thank you on behalf of AVSI, all the friends, supporters, and donors who are represented here, along with our colleagues in the field from the Middle East, Africa, Latin America: thank you for this audience and for the support that the Holy See has provided to the Open Hospitals project in Syria.

When we started thinking about this project in 2016, Syria was at the top of world emergencies: the Syrian people were asking for help right away. At the initiative of Card. Zenari, with the support at the beginning of Cor Unum, then the Dicastery for Promoting Integral Human Development, and the Dicastery for the Eastern Churches, we tried to respond.

Our intervention does not claim to “save” Syrians, but aims to help bring relief to the victims of a conflict and an economic crisis that make life more unsustainable every day.
The awareness that we cannot “save” those in need, that we cannot help everyone, has never been an alibi for giving up intervening in contexts of war or extreme poverty.

AVSI, which is celebrating 50 years this year, has always been interested in looking at reality in all its complexity and contradictions, and is pushed by this to translate its mission into concrete actions, together with different partners and actors.

Since its establishment on the initiative of a few people belonging to “Communion and Liberation,” who have been joined over time by many others from different backgrounds, AVSI has been working for a world where the person can be the protagonist of his/her development and that of his/her community.

Because, as the encyclical letter Fratelli Tutti indicates, building development requires social friendship and universal fraternity. It “calls for an acknowledgement of the worth of every human person, always and everywhere”.
This is the cornerstone of the Open Hospitals project, which has provided almost 80,000 free treatments and aims to take care of 140,000 Syrians by 2024.

There are countless testimonies from the people treated we receive: they mostly say they are grateful. Sometimes they are almost surprised to have found a loving welcome although they were of a different religion, as if the trust that the other can be a resource, not always a threat, has been lost in the country.

Some people, cared for by the project, return and ask to volunteer in hospitals. Like Hani, a young Muslim man who was badly injured and feared he would never walk again. Instead, he was back on his feet thanks to a series of surgeries, was able to start playing with his son again, and to work to support him. Such testimonies document how perceiving oneself welcomed is generative of good: it produces hope, social friendship and fraternity, which are essential for rebuilding a country wounded by war.
The project, made possible thanks to many donations, from the savings of a child – here today – to the millions from businesses and public and private entities, was also well received by local, civil and religious institutions.

The partnership between different hospitals provides a model to be inspired by: tackling the most critical situations together makes a good flourish that goes beyond the sum of individual efforts.

But we cannot stop. The Syria emergency has been joined by countless other emergencies, challenging the most fragile and those like us who work in development cooperation. They almost create a dispute: who “deserves” more help? Is there a hierarchy to be respected in need? How to be present?
These are questions that we ask ourselves every day and entrust to you, Holy Father, as children who do not want to lose sight of the authentic and original motive of their action. 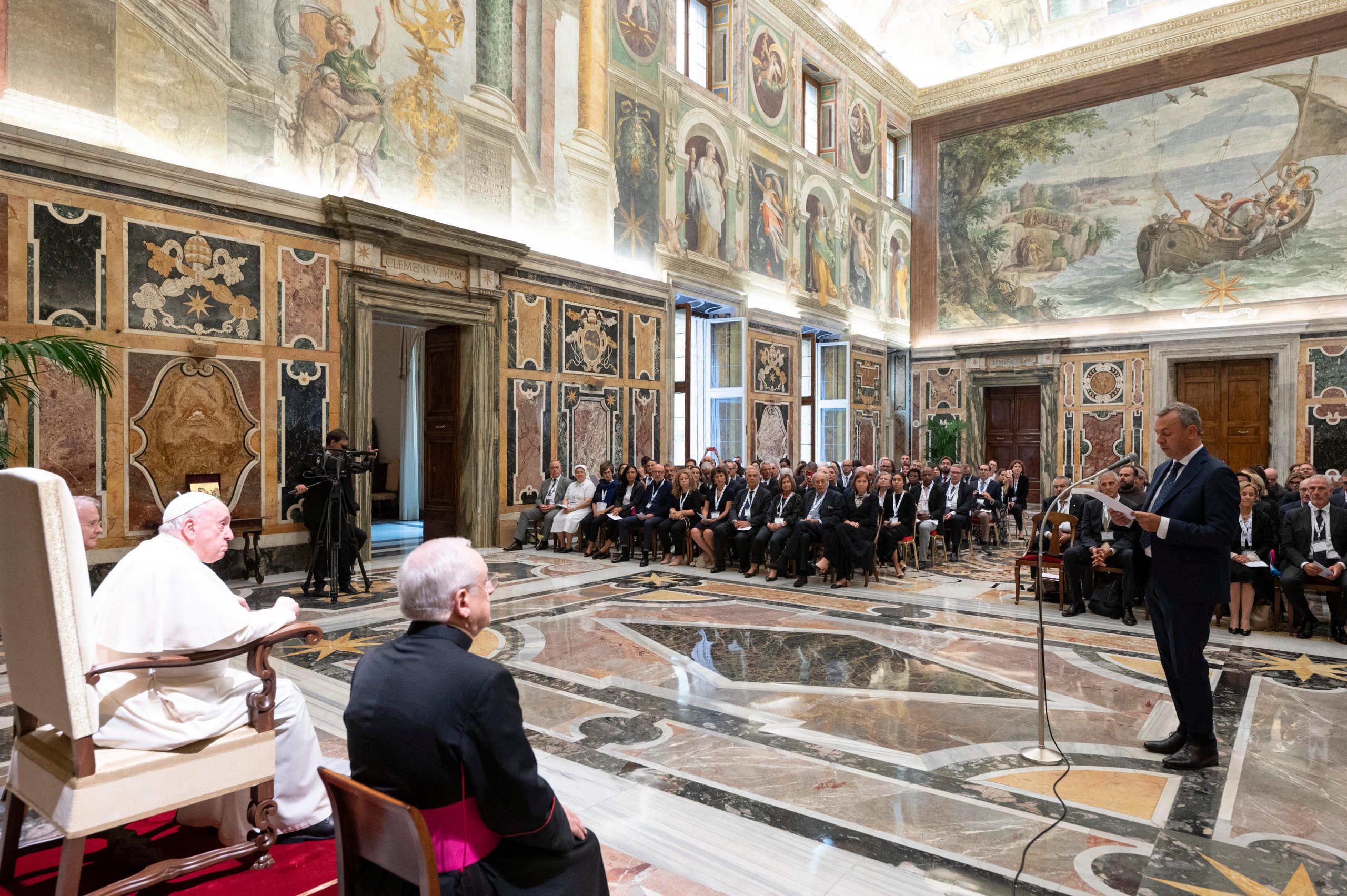 I offer you a warm greeting, as you meet in these days to advance the praiseworthy initiative of “Open Hospitals” in Syria. I thank Dr. Giampaolo Silvestri, Secretary General of the ASVI Foundation, for his kind words of introduction. I also cordially greet Cardinal Zenari, who has served as Apostolic Nuncio in Syria for fourteen years.

When we think of Syria, there comes to mind the verse of the Book of Lamentations: “Vast as the sea is your ruin; who can heal you?” (2:13). Those words refer to the sufferings of Jerusalem, but they also make us think of the suffering endured by the Syrian people in these twelve years of violent conflict. If we consider the number of the dead and wounded, the destruction of entire quarters and villages, as well as important infrastructures, including healthcare institutions, it is natural to ask: “Syria, who can now heal you?”

International observers tell us that the crisis in Syria continues to be one of the most serious worldwide, in terms of destruction, growing humanitarian needs, social and economic collapse, and poverty and famine at dire levels.

Recently, I was given a gift, a work by an artist who, inspired by a photograph with real faces, portrayed a Syrian father, physically exhausted, carrying his son on his shoulders. He was just one of some fourteen million internally displaced persons and refugees. That is more than half of the Syrian population prior to the conflict. It was a powerful image of the sufferings experienced by the Syrian people.

In the face of such immense suffering, the Church is called to be a “field hospital” and to heal wounds both physical and spiritual. We think of the words of the Gospel: “That evening, at sundown, they brought to [Jesus] all who were sick and possessed with demons. The whole city was gathered around the door. And he cured many who were sick with various diseases” (Mk 1:32-34; cf. Lk 4:40). It is the Lord who heals.

From the time of the Apostles, the Church has remained faithful to the mandate she has received from Jesus: “Cure the sick, raise the dead, cleanse the lepers, cast out demons. You have received without payment; give without payment” (Mt 10:8). In the Acts of the Apostles we read that “they carried out the sick into the streets and laid them on cots and mats, in order that Peter’s shadow might fall on some of them as he came by” (5:15) and might heal them.

Mindful of this legacy, I have frequently encouraged priests, especially on Holy Thursday, to touch the wounds, the sins, the anguish of their people (cf. Homily, Chrism Mass, 18 April 2019). To touch them. I have also encouraged all the faithful to touch the wounds of Jesus, that is, the many problems, difficulties, persecutions, and infirmities of those who suffer (cf. Regina Caeli, 28 April 2019; Evangelii Gaudium, 24), and the wars.

Dear friends, your project – “Open Hospitals” – is committed to supporting the three Catholic hospitals that have operated in Syria for a hundred years, as well as four walk-in clinics. This initiative came about with the patronage of the Dicastery for Promoting Integral Human Development and is supported by the generosity of Church-related institutions – The Papal Foundation and several Bishops’ Conferences, and some government agencies – Hungarian and Italian –Catholic humanitarian institutions and a number of generous individuals.

Your programme is precisely that of “Open Hospitals”. Open to those who are sick and poor, without distinction of ethnic or religious affiliation. This is the hallmark of a Church that seeks to be a home with open doors, a place of human fraternity. In our charitable institutions, people, and above all the poor, must feel “at home” and experience a climate of dignified welcome. Then, as you have rightly emphasized, two things will result: people’s bodies will be cared for and the social fabric will be mended by fostering the exemplary coexistence between different ethnic and religious groups that is characteristic of Syria. In this regard, it is significant that the many Muslims assisted by your hospitals are the most grateful.

Your initiative, together with others that have been promoted by the Church in Syria, blooms, as Saint John Paul II said, from the “creativity of charity” (Novo Millennio Ineunte, 50).

Today, you gave me a beautiful icon of Jesus the Good Samaritan. The man in the Gospel parable, beaten, robbed and left half-dead by the side of the road, can serve as another tragic image of Syria, beaten, robbed and abandoned for dead on the roadside. Yet not forgotten or abandoned by Christ, the Good Samaritan, and by so many other good Samaritans: individuals, associations and institutions. Several hundred of these good Samaritans, including several volunteers, have lost their lives helping their neighbours. Our gratitude goes to all of them.

In the Encyclical Fratelli Tutti, I wrote that, “The story of the Good Samaritan is constantly being repeated. We can see this clearly as social and political inertia are turning many parts of our world into a desolate byway, even as domestic and international disputes and the robbing of opportunities are leaving great numbers of the marginalized stranded on the roadside” (No. 71). And I asked everyone to consider that “all of us have a responsibility for the wounded, those of our own people and all the peoples of the earth” (No. 79).

In the face of so many serious needs, we experience how very limited are our possibilities for intervening. We feel a bit like Jesus’ disciples, faced with an enormous crowd that had to be fed: “We have only five barley loaves and two fish; but what are they among so many?” (Jn 5:6-9). A drop of water in the desert, we might say. Yet even the rocky Syrian desert, after the first spring rains, is clothed in a blanket of green. So many small drops, so many blades of grass!

Dear friends, I thank you for your work and I offer you my heartfelt blessing. Keep pressing forward! May the sick be cured, hope be reborn, and the desert blossom! I ask this of God, for you and with you. And I ask you too, please, remember to pray for me. Thank you.

This image, of the Syrian father fleeing with his son, reminded me of when Saint Joseph had to flee to Egypt. He did not go in a carriage, no, he went like this, fleeing precariously. The original of this image was given to me by the artist, who is from Piedmont. I want to offer it to you so that, looking at this Syrian father and his son, you can think of this everyday flight into Egypt, of this people that is suffering so much. Thank you.

Link at the speech 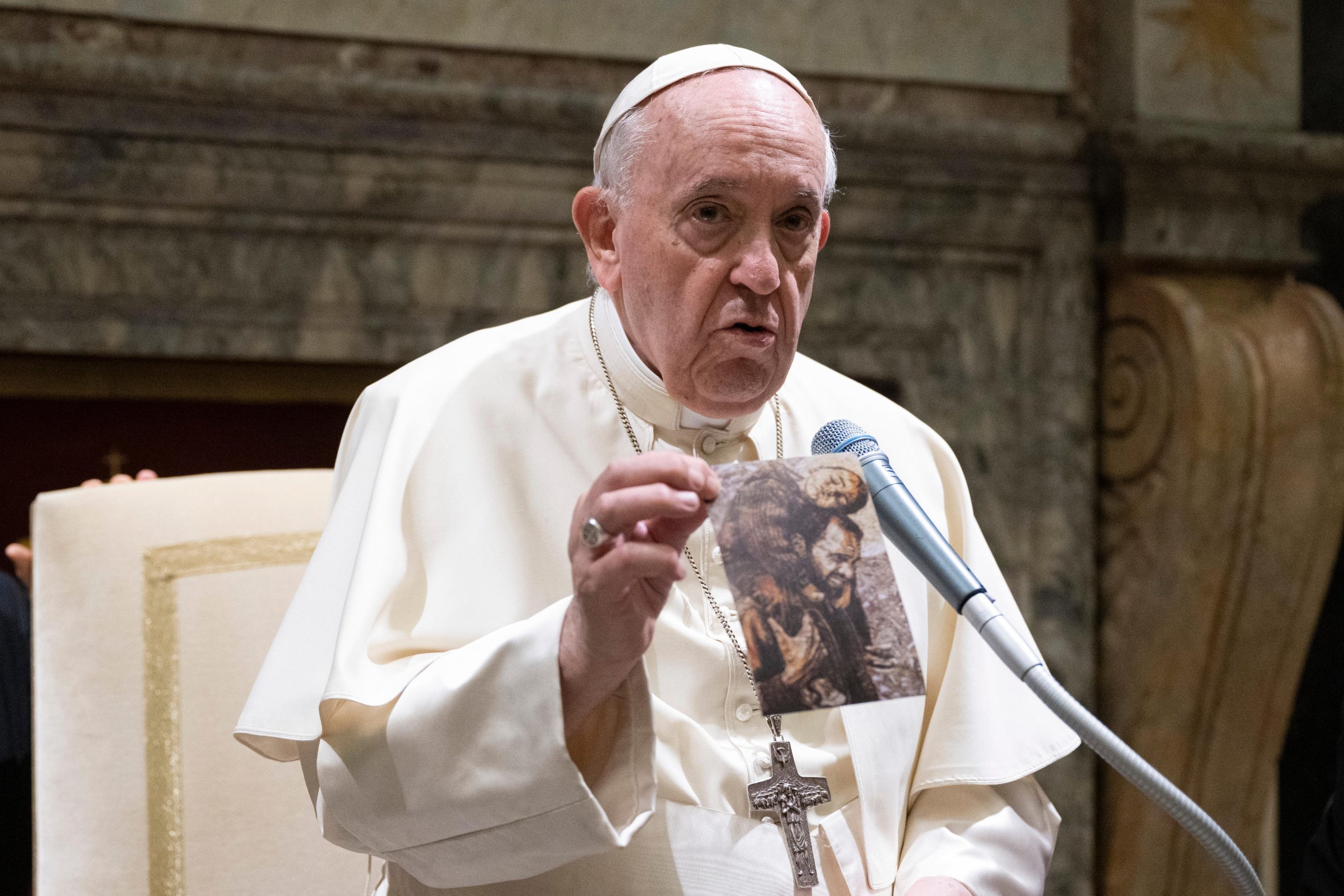