Education Against Terrorism: an experience from Kenya

A year after the massacre in Garissa that killed 148 people and injured 79 or more, security in the northern area of Kenya remains fragile. The terroristic group Al-Shabaab, which took responsibility for the shooting, constantly attacks military and civilians while it aims to recruit the youngest, even in Dadaab. In the world's largest refugee camp, AVSI Foundation is working to give the inhabitants of the camp an alternative to violence through various educational projects.

AVSI main goal is to train 600 primary school teachers through classes in Somali language approved by the Ministries of Education of both Kenya and Somalia. The project is financed by the EU and is implemented by AVSI in consortium with Save the Children UK, and LWF.

Support to Education for Refugees in Dadaab (SERD) is one of the first projects in the area of the voluntary reentry program of refugees to their homes in Somalia, in accordance with the Tripartite Agreement among the governments of Kenya and Somalia and the UNHCR.

A prolonged humanitarian emergency: this is how experts describe the situation in Dadaab, for more than 25 years the most populated refugee settlement in the world. The camp is the product of conflicts in the early 1990s and of repeated periods of drought that have always affected this area.

Here, in northern Kenya, in a semi-desert area on the border with Somalia, live 350,000 people, mainly Somali, but also Ethiopians, Congolese, Burundians and South Sudanese. They are surviving thanks to the help of the international community: they are forbidden to leave the camp and only some manage to earn income with some odd jobs or trade.

Dadaab is a very inhospitable land that so many call home because they were born and raised here and they feel that this is where they belong. And yet, for quite some time, the Kenyans look upon the inhabitants of Dadaab with fear and suspicion, mainly because Al-Shabaab, the terrorist group affiliated with Al Qaeda, recruits their soldiers in Dadaab and periodically attacks civilians and military personnel.

Al-Shabaab outreach in the area is so strong that the road that connects Nairobi with Dadaab is considered one of the most dangerous in all of Africa: it's possible to cross only with an armed military escort. According to the Kenyan government, on April 2, 2015, exactly one year ago, the commandos who killed more than 140 young people at the University of Garissa, just 100 kilometers away, came from Dadaab.

In Dadaab, the militia finds fertile ground for enlisting new recruits. In a reality where only one out of every two young people is able to go to school, extremism becomes an ideal to cling to, capable of offering something to believe in for those who have only ever known misery and humiliation. There is a great risk that these radical groups in the camp become the only model of life for many young people who are often still children. 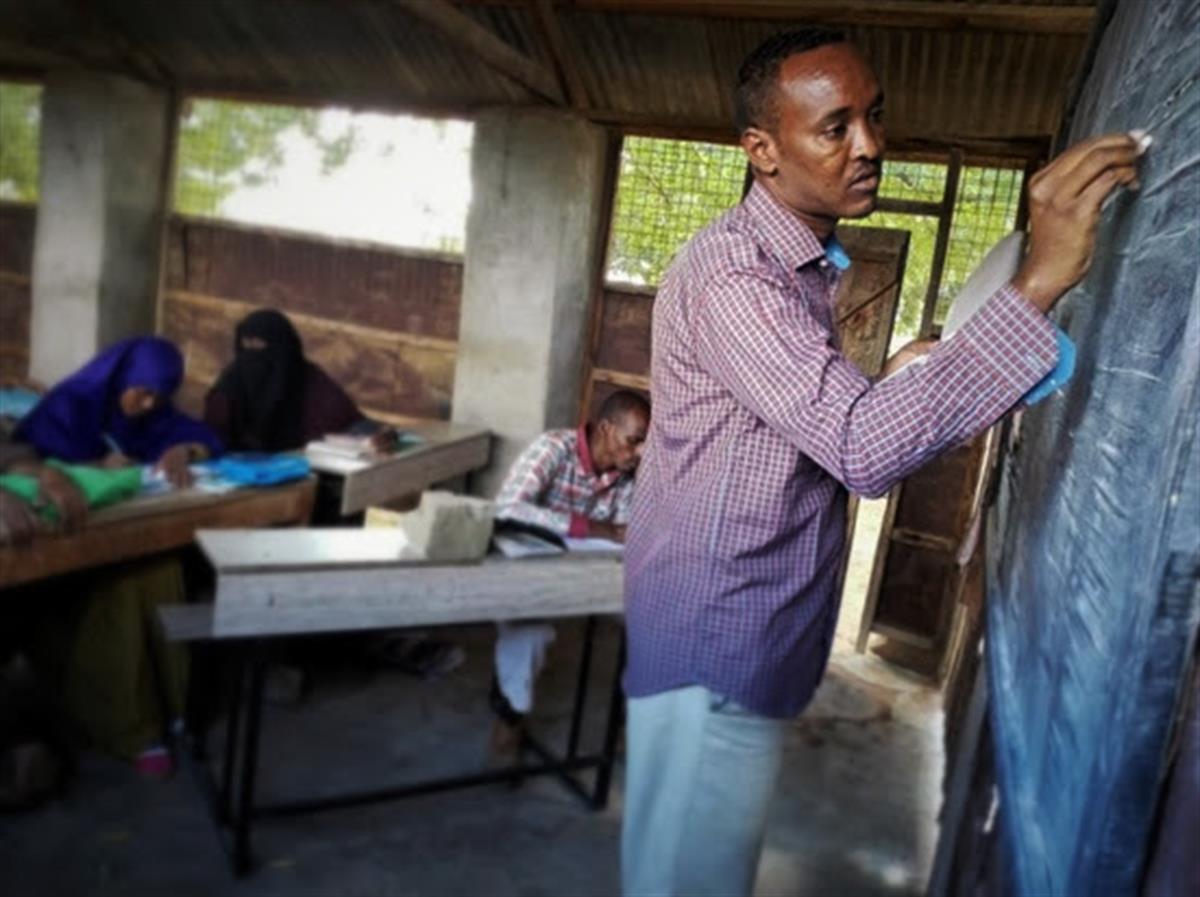 Since 2009, AVSI Foundation has promoted educational projects as an essential instrument in the fight against radicalism. AVSI believes that a holistic education of the person is the remedy through which it is possible to propose a way of looking at reality as something positive and to promote the desire for growth, justice, love and truth that are innate in each person. It is this kind of schooling that can and should be supported in order to build a peaceful coexistence.

The Support to Education for Refugees in Dadaab (SERD) project, financed by the EU in a consortium of AVSI with Save the Children UK and LWF, has as its goal the training of 600 primary school teachers through courses taught in the Somali language and recognized by both the Kenyan and Somali Ministries of Education.

SERD is one of the first projects in the area of the voluntary reentry program in Somalia in accordance with the Tripartite Agreement among the governments of Kenya and Somalia and the UNHCR. Reentry into Somalia will be neither suggested nor promoted: the intention is simply to provide skills that can be used in the country of origin and therefore it will be up to each refugee to evaluate whether to adhere to the UNHCR program for voluntary reentry. The security conditions in Somalia are still critical in spite of a newly formed government and increased investment in reconstruction.

The project was born from the experience of AVSI with teacher training in recent years in Dadaab. Today, some of them, like Ali and Mohamed, teach in schools in Mogadishu and in southern Somalia. In Dadaab, they had the opportunity to learn English, but now they need to be able to speak and teach in Somali and to have an understanding of the history, geography and culture of their country. This is exactly the objective of the new SERD project: to provide in-depth knowledge about Somalia for a “Somali” education.

Particular attention will be paid to the formation of women, who in the Somali tradition, do not work outside of the home, but who demonstrate a great passion for teaching. This formation will take place throughout the year of 2016, at an overall cost of about 150,000 Euros (250 Euros per trained teacher).

The Experience of Boy and Girl Scouting 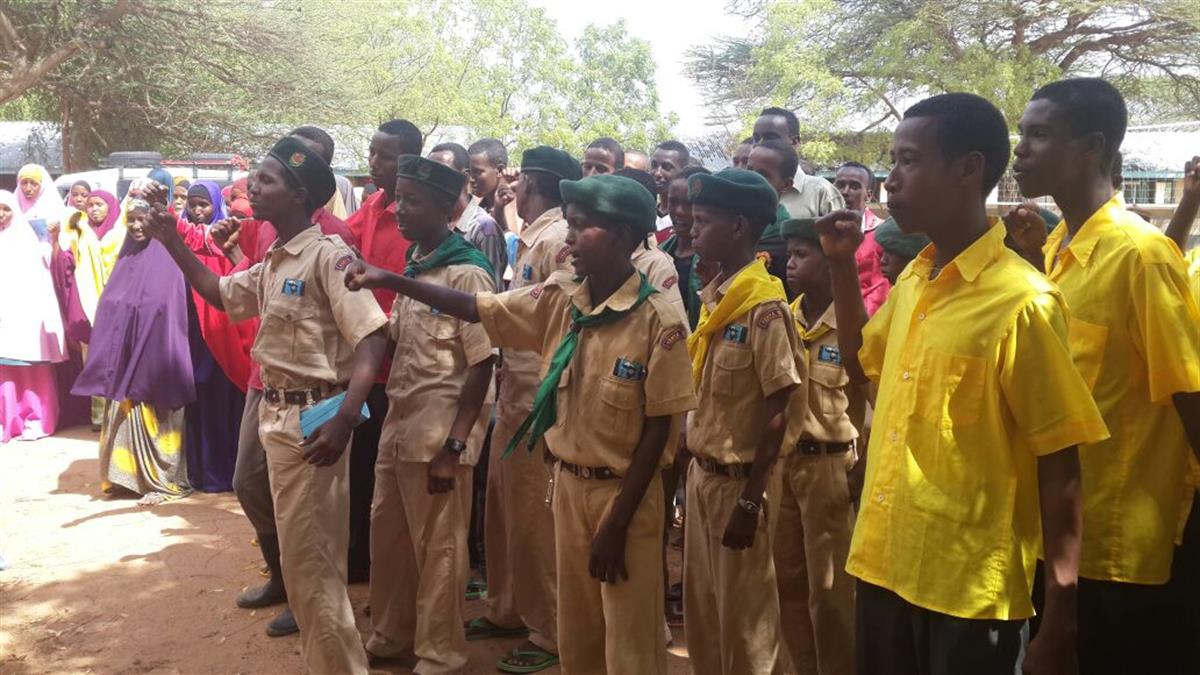 There is more than just school. The values of friendship and brotherhood can be promoted in many different ways, starting from the positive use of free time even during school vacations. In recent years, AVSI has created groups of Boy and Girl Scouts in Dadaab.

This is another way of promoting the values of friendship and brotherhood among children and teenagers, and of fostering a positive use of free time, especially during school vacations when Al-Shabaab recruitment activity is more intense. An unexpected positive outcome became evident, when the boy and girl scouts began to convince their peers who had abandoned their studies to re-enroll and continue their education.

AVSI has been operating within the Dadaab refugee camps since 2009. The NGO has renovated and built 327 new classrooms in primary schools and is the leading organization in teacher training. Since then, AVSI has been able to train more than 1,250 teachers thanks the close collaboration with the Kenyan Ministry of Education, and to the financial support from the European Union and the U.S. Bureau of Population, Refugee and Migration (BPRM).