With the communities in Uganda, a promise of change.

From war and the HIV/AIDS epidemic to a new model of reception: a photo reportage will portray how Northern Uganda has changed together with AVSI. With a glance on the new generations. 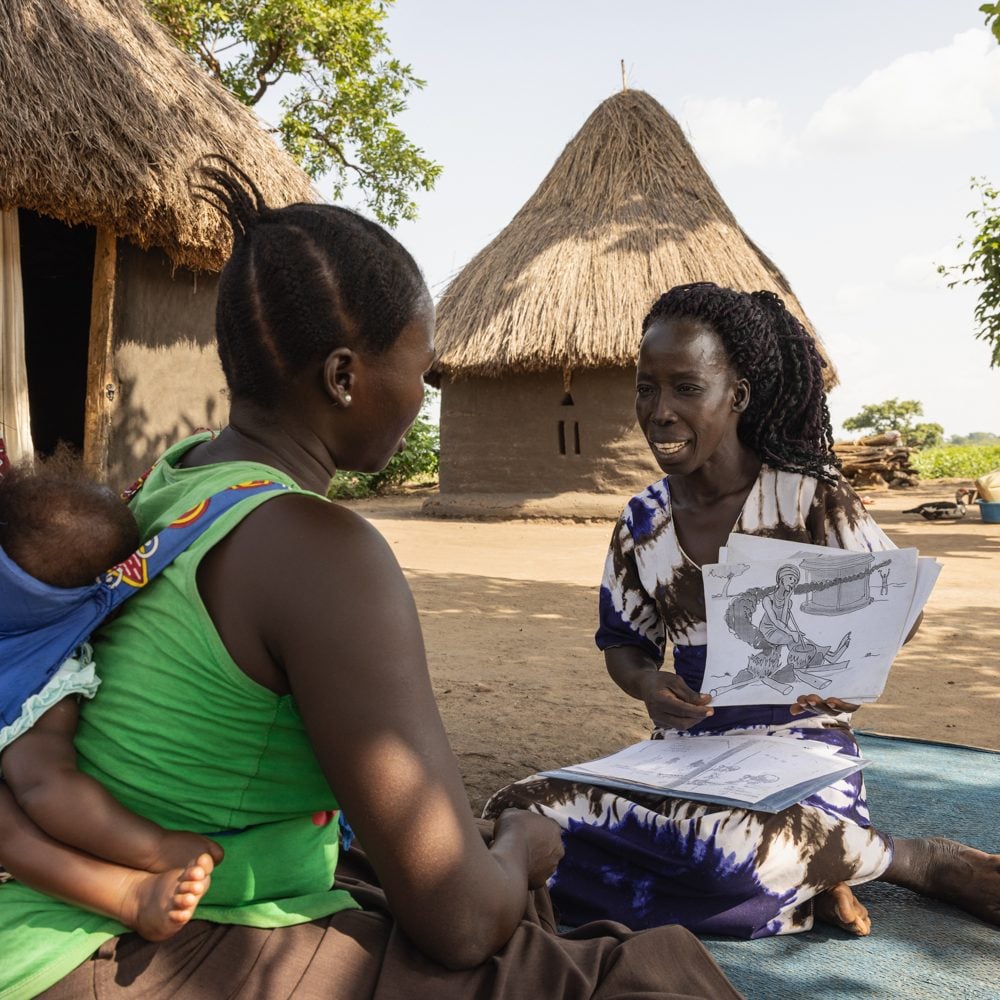 My name is Esther Ruth Mbabazi. I’m a photographer from Uganda and my work explores different social issues.

AVSI is celebrating 50 years of working in communities globally. As a photographer in Uganda, I was asked to document their work in the Northern part of the country.

AVSI works across different sectors like health, education, livelihoods, capacity building, infrastructure, with education and personal development of the individual at the center of their work.

During this documentation, I got to meet many people whose lives have been greatly impacted through AVSI’s work. Individuals and communities who have been accompanied and supported along their journeys.

I met Doctors and hospitals that have worked with AVSI to better serve their communities. Learners and teachers whose capacities have been built, and their school environments improved by AVSI.

I met widows whose lives have been transformed to self-sustenance. And communities whose social cohesion as well as their access to social services improved through constructions of roads and bridges.

Through this documentation, I met individuals, protagonists in their development and that of their communities.

During this documentation, I got to meet many people whose lives have been greatly impacted through AVSI’s work. Individuals and communities who have been accompanied and supported along their journeys.

Through Meeting Point, an organization built on the foundations of friendship and support for people with HIV/AIDS, largely supported by AVSI, We got to meet Atim Susan, 54, a mother of 6 living in Kitgum.

A widow, she didn’t have any support after losing her husband in 2005. At that time, Meeting Point was assisting widows affected by HIV. They trained her and taught her how to approach and counsel HIV patients in her community. Meeting Point offered her support under the OVC program for two of her children to attend school.

She was also trained in kitchen gardening, and in training mothers in better nutrition practices for children. She was named a role model mother in her community.

Through Meeting Point, she joined a VSLA through which she saved money and bought her own land on which she built her home.

She also received some capital to start a small clothes selling business at the market, the incomes that she uses to pay her children’s school fees and support her homestead.

01/06
Atim Susan, 54, mother of 6 living in Kitgum. She lost her husband in 2005, when she was 5 months pregnant. She didn’t have any support, her late husband’s family wasn’t supporting her and she couldn’t afford rent. At that time, Meeting Point was assisting widows affected by HIV. They trained her and made her a VHT, taught her how to approach and counsel HIV patients in her community. Meeting Point offered her support under the OVC program for two of her children in form of scholastic materials, sanitary materials and school fees. She had tested HIV negative for 11 years until when in 2016 she tested positive and started medication with Meeting Point. She was also trained in kitchen gardening, and also being a VHT she was trained in training mothers in better nutrition practices for children. She was named a role model mother in her community. Meeting Point also helped her with construction of her home and latrine. She also received small capital (around $100) to start a small clothes selling business at the market. She has been selling since 3 years, and she uses the income for paying her children’s school fees and supporting her homestead. Two of her children completed diplomas in catering, accounting and veterinary practice. Through Meeting Point, she joined a VSLA through which she saved money and bought her own land on which she built her home in 2011 where she now feels safe and secure. She dreams to build a more permanent house.

At St. Joseph’s Hospital, Kitgum, about 112,000 people are served per year from Kitgum, the neighboring districts and the refugee settlements.

AVSI supported in construction of the administration block, private OPD, renovation of the surgical ward, extension of children’s ward among others.

Her roles include clinical work, surgeries, follow up with clients, and supervising intern doctors in the OB GYN clinic at the hospital. As a manager, she contributes to grants proposals and looks for partnerships for the hospital.

She says she’s a gynecologist today because of AVSI’s support.

The hospital also has a School of Nursing and Midwifery from which Akello Evaline, an Enrolled Midwife graduated. The school helps the hospital to build its human resource.

01/06
St. Joseph’s Hospital, Kitgum. A private not-for-profit hospital under the Catholic Church started by the Comboni missionaries. AVSI supported the hospital in form of Infrastructure development, logistics, human resource development, finances since 2002. AVSI supported in construction of the administration block, private OPD, renovation of surgical ward, extension of children’s ward. The construction and rehabilitation of staff accommodations was also done by AVSI. AVSI also built human resource through exchange programs with Italian medical schools. When AVSI left the hospital, the hospital has continued to work with support from other partners. It is now a referral hospital for Kitgum, Pader, Lamwo and the surrounding Refugee Settlements. The hospital now also has a nursing and midwifery training school to build on their human resource.

In infrastructure, this bridge in Agago District was built to connect villages that would otherwise not connect in the rainy season.

The communities are now able to cross the bridge and farm on the other side, access schools, markets, hospitals, and meet friends and family members with the distances reduced.

Community members like Daniel said there were a lot of problems and chances of drowning but now they are able to travel and access services on the other side either on foot, using motorcycle or by car.

Janet said after the bridge construction, it’s easier for movement, and she goes to the other village’s health center.

Along with the bridge construction, AVSI worked with the community to widen a community road.

Rose said, before the road was widened, it was difficult for them to access their homes, and now they are able to visit their family and friends in the neighboring villages.

And for Margaret, it was about the good harvests that they are now able to take to the markets.

We went to Loborom Health Center III, one of the health centers supported by AVSI. The facility used to have 2 births a month and now receives about 20 births a month.

AVSI helped with extensions of the maternity ward and supported maternal child health services at the health facility.

Through AVSI’s support, the health center does community outreaches and health dialogues encouraging mothers to come for services at the facility.

In Palabek refugee settlement, we met Aciro Paska Jackson, 16, a learner at Awich Primary School. Her favorite subject is Math and she wants to be a nurse in future.

AVSI constructed the school structures at her school and offers different trainings to the teachers.

We also went to AVSI’s distribution of scholastic materials at Beyogoya Primary School, in Palabek refugee settlement. The school has 4,000 learners with one class having as much as 500 learners.

In a refugee setting where parents are not able to support their children with materials for school, the population depends on support from Organizations working in the settlement.

We met Ajok Pamela, a cluster leader and peer facilitator teaching a cycle of the psychosocial sessions with AVSI. The classes focus on topics like anxiety and depression.

Before the training, Pamela had a medical condition that required surgery but she had no money to do it. She joined the group and received a lot of emotional support from the group members.

When she completed the 8 weeks sessions she was asked to help others.

Barbara’s child is sick and she would be rushing her to the hospital every time which led her into depression, but with the group she has found emotional and psychological support and hope for her and her daughter, Pauline.

In Omoro District, we met Odong Sunday, a 35 year old farmer who is a war victim.

He was abducted during the war, at age 12. When he tried to escape one day, he was ambushed, bombed and he lost his leg.

With AVSI’s support, he was taken to the hospital, given a prosthetic limb and trained until he could use the legs fully.

AVSI also trained him in tailoring, after which he was given the tailoring machine that he’s still using at the shop.

He was also  trained in farmer field school by AVSI, and he started a vegetable garden from which he has earns a living.

He was motivated to form a group with other people with disabilities and together they started a tree nursery bed with different species of indigenous trees.

Sunday said his social life has improved, he is more confident. The leg is helping him achieve the mobility he had lost.

The Orthopedic workshop at Gulu Referral Hospital is supported by AVSI and The Trust Fund for Victims. They make 400 legs every year.

Once a month, AVSI does community outreaches for community sensitization, identification of clients and follow ups where counselling for war victims is done.

AVSI also offers livelihoods support after a community member has gone through the counselling sessions.

Then, we met Okot Lawrence, a farmer who was part of a training under AVSI’s SKY project in 2017.

Lawrence was trained in horticulture and business management.

After the training, he started production, growing tomatoes, eggplants, onions, cabbages. And from the sales he got money, bought an ox plough, then bought a motorbike to transport his produce. He has since bought land, built houses from the profits of the farm sells.

He said, before the training, he didn’t know that he could attain so much from farming. His life and that of his family is better.

He is now sharing the skills with other youths in the community.